It is his Silver Anniversary, but for us he is gold

In recognition of Deon Anderson's 25th anniversary with Howick.

This month marks an increasingly rare achievement in this day and age. Deon Anderson, our head of global sales, celebrates his 25th anniversary with the Howick group on 27 November. So as a tribute to Deon and the passion and enterprise he brings to his work, this is his story, as told by his colleagues. 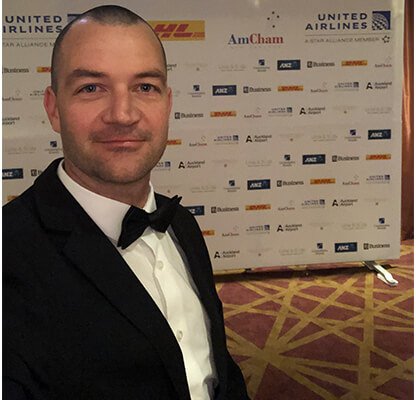 From machine apprentice to global head.

Deon joined Howick on the ground floor, as a machine apprentice learning the tools. Since then, he has done everything from being a fitter and turner, to manufacturing components, running one of our factories and to all aspects of customer service, support and sales. That has given him a perspective on the business and on the industry which is pretty much unique.

As quoted in his regular low-key, unassuming way on his Team Profile on the Howick website: “I know the light gauge steel (LGS) roll-forming business pretty well now, and I do understand the opportunity it presents for smart construction businesses because I’ve seen first-hand what it can do through the successes and growth our customers have achieved.”

We turned to one of Deon’s close colleagues, head of global marketing and export, Cindy Posimani, to give us the inside line on what makes Deon special.

“Deon is high-spirited and can be rambunctious and loud at times, but he sure livens things up at work. When we travel internationally, he seems to have friends everywhere. This is especially the case in the UK in Harrogate, where he lived for a time. He has an innate knack of connecting with people from all walks of life. He’s highly personable, so he makes and keeps friends easily.

Underneath all that is a person dedicated to his work. He regularly works at odd hours, going the extra mile to answer sales enquiries or help with supporting our customers. Despite his ‘head of global’ title, he is always willing to be hands-on when needed. He is also in his element getting his hands dirty again – running profiles for testing, assembling panels for tradeshow displays, and even sometimes jumping in to make tools when there is an urgent requirement.

His dedication to his work and the company is representational of the culture of that has evolved here at Howick. We believe in our work and value accountability, so we do what we say we will do. More than that he embodies the sense of family that remains at the heart of this family-owned business. Things like looking out for colleagues during lockdown because he knows they live alone, or tirelessly organising social events with our well-loved ‘camp mother’, Marjorie, who is another long-standing pillar of the company. All this is on top of his heavy workload.

Most of all, what I appreciate about working with Deon is that he wants the best for the company and its customers. It goes unsaid, but Howick, along with the owners and many long-time staff members, really is like his second family.”

Deon is part of a rare phenomenon in workplaces these days. We refer to it internally as the 20-something club. It is only open to those who have worked for the company for 20 years or more, and at Howick we are lucky to have some very special members. Two other members of the 20-something club are general manager, Wayne Rowe and senior administrator, Marjorie Hilton. Here is what they had to add about life with Deon at Howick.

Wayne mentioned some early shenanigans that almost went awry. “Deon was full of beans and boisterous when he first started (he still is by the way!). Like many 16-year olds, there were times when he played up, and we had to give him a warning once to shape up or ship out. To his credit, he shaped up just fine after that. 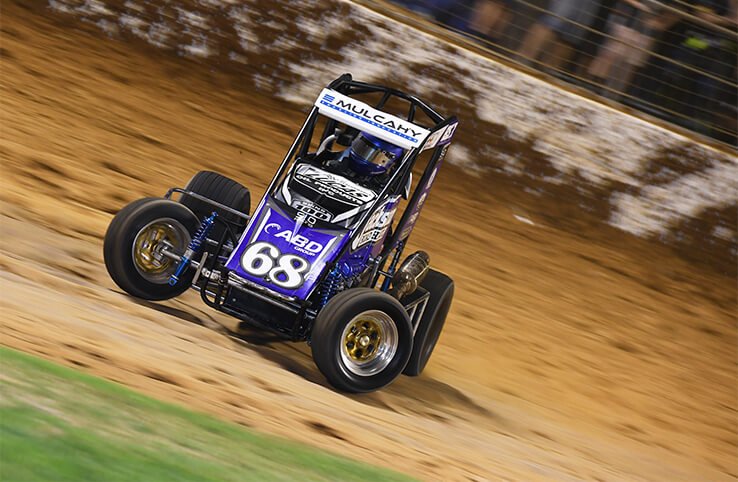 "Deon was full of beans and boisterous..." He is in more control these days and he's normally out in front.

When he got into the sales side of things, and was still quite new to it, Deon would make the sale because customers liked him, and he would go out of his way to see them right. He has gone on to build solid relationships with many of them. Indeed, some of those early customers I know are still friends that he keeps in touch with regularly - both professionally and personally. That is a great reflection on his work ethic.” 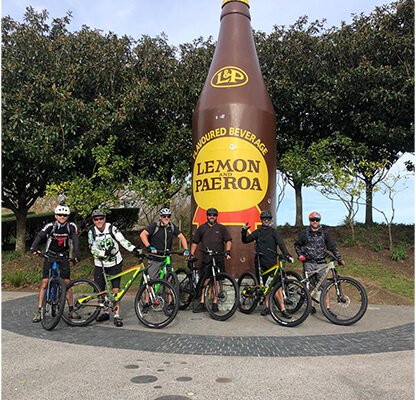 "World famous in NZ." Deon with his mountain bike crew at Paeroa.

Deon is always good fun to be around on overseas trips too. Wayne remembers one trip to Melbourne that was, in retrospect, primarily orchestrated so he could catch up with an old school friend, who later became his wife.

Marjorie has become family friends with Deon, as his rugby league side played on the same grounds as her children. Marjorie also highlighted Deon’s work hard, play hard ethic. “Deon is passionate about his work, and a great frontman for the company. He is loud, but he has a heart of gold. He often picks up the phone to check everyone is OK. His customers love him. He goes out of his way to get the job done – there’s no ‘half arsing’ around, he always gives 110%.”

She also mentioned his willingness to quite literally go the extra mile. “Deon is game to travel anywhere and give it a go. He has been to the far reaches of the planet to commission Howick machines, including Mongolia - where he slept in a communal tent, the Middle East, South America, and many more.” 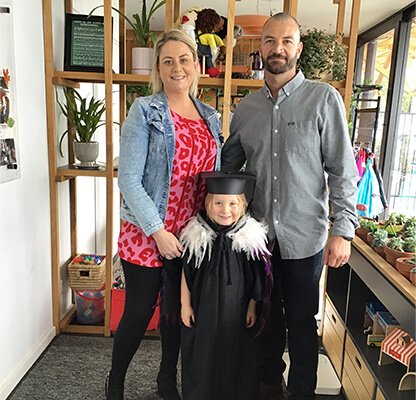 Deon with his wife and daughter. 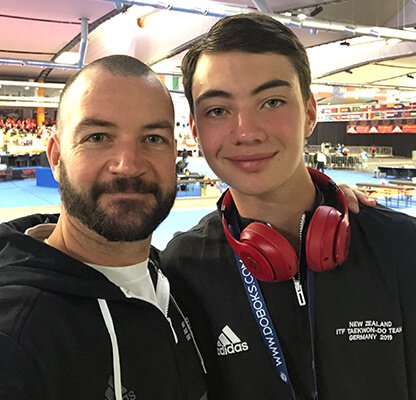 And with his son who represented New Zealand in Taekwon-Do

To have spent 25 years with a company is a remarkable achievement. To do that unstintingly, with the same passion as he always had, is exemplary. Deon Anderson, this one is to you! On behalf of all the team at Howick, thank you for your dedication.

IN THE FRAME: DECEMBER 2021 NEWSLETTER   nextchevron_right